O nce upon a time, there was a kingdom in Central Java named Baka. It was named after the king, Prabu Baka, who was a man-eating giant. Desp... 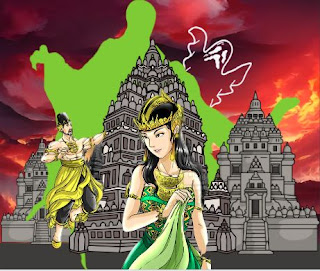 O
nce upon a time, there was a kingdom in Central Java named Baka. It was named after the king, Prabu Baka, who was a man-eating giant. Despite being a giant, the king had a very beautiful daughter named Roro Jonggrang (The Slim Girl).

The time came when Prabu Baka wanted to expand his territory by conquering the neighboring kingdom, Pengging. The king of Pengging, Prabu Damar Maya, responded and sent his son, Raden Bandung Bandawasa, to defend their kingdom.

In victory, Bandung Bandawasa entered the palace where Prabu Baka used to live. When he saw Roro Jonggrang, he fell in love. He wanted to marry her.

Of course, Roro Jonggrang didn't want to marry the man who had killed her beloved father. She refused. However, Bandung Bandawasa persuaded her to marry him. In the end, Roro Jonggrang accepted his marriage proposal with two conditions that seemed impossible to fulfil.

"I want you to make a well and a thousand temples in just one night. They must be ready before the sun rises tomorrow morning," she demanded. She felt sure that it would be impossible for Bandung Bandawasa to fulfil her requirement and marry her.

Bandung Bondowoso agreed. After a few hours, he was able to make a well with his great supernatural power.

"Done!" he said with satisfaction. "I've finished the well, now the temples. I will ask my genie soldiers and helpers to help me build them."

Bandung Bandawasa then summoned genies and ordered them to build one-thousand temples. The genies worked hard and soon, there were able to build nearly 999 temples.

Seeing that the job was almost completed, Roro Jonggrang panicked. “Marrying Bandung Bondowoso is the last thing I want to do in my life. I have to make him fail one way or another,” she thought.

Then she had a great idea. She gathered all her servants and village girls and asked them to help her. "Listen, the genies are building the temples and it's unfair! We have to collect a lot of straw. Come on! Hurry up!" said Roro Jonggrang to them.

"What are you going to do with the straw, Princess?" asked one of the women.

So they did. They burnt the straw and started pounding the rice pestles in their homes as if they had been grinding some rice.

It worked! Seeing the reddish sky and hearing the sound of people pounding rice pestles, the genies thought that the sun was rising. They fled, leaving the last temple unfinished. They did not know that they had been tricked by Roro Jonggrang and her women.

Seeing this, Bandung Bondowoso was angry. He knew that Roro Jonggrang was trying to trick him and fail his attempt to marry her. 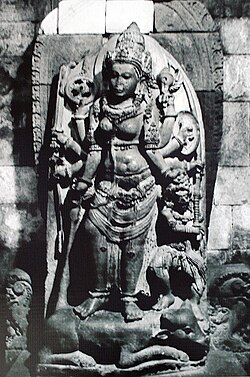 "You cannot fool me, Roro Jonggrang. I have built 999 temples. I just need one more temple to fulfil your requirement. Now, you'll complete my task and be the one-thousandth temple!"

Suddenly, Roro Jonggrang's body became stiffer and stiffer. She could not move. The curse had made her become a statue.

It is believed that Ratu Baka's site near Prambanan area was the palace of Prabu Baka, whereas the 999 unfinished temples is now known as Candi Sewu (a thousand temples). Arca Durga (Durga Mahisashuramardini), a very beautiful statue in the north part of Prambanan's main temple, is believed to be a manifestation of the cursed princess. People name it the statue of Roro Jonggrang.

A. Asking about Feelings / Thoughts

H. Cheering someone up

K. Calming someone down 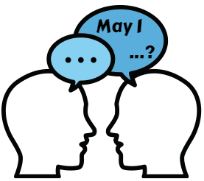 W
riting this material reminds me of one of the most amusing experiences that I have had during my long years of being an English teacher. That day, I was teaching a class when a boy student got up from his chair and walked to me. Then he spoke to me in Indonesian, asking for permission to go to the bathroom. I rejected and asked him to use English. Responding to my requirement, he said, "Sir, I am toilet." And the class burst out laughing.

Do you know why? Yes, the sentence "Sir, I am toilet." is NOT the correct expression to say when you are requesting or asking for permission to leave the classroom and go to the bathroom. Now, in order for us not to make a similar mistake when we are requesting permission, let's study the following expressions.

Note: Be careful when responding to a request using "Would you mind ...?". The response "Yes, certainly" would indicate that "you would mind". Hence, if you have objection to the request and do not want to give permission, the response should be "Yes, certainly", "Yes, I do". If you have no objection, the appropriate response would be "No, I don't mind", or "No, please be my guest."

Man : Excuse me, could I try this shirt?
Woman : Yes, please. There's a fitting room over there, near the counter.

Man : Do you mind if I use your computer to type this letter?
Woman : No, not at all. Please do.

Woman : May I open the windows? It's very stuffy here.
Man : I'm afraid you can't. The wind is very strong outside.

Man : Can I put my luggage here?
Woman : That's okay, but please don't be too long.
G. EXERCISE

Write short dialogues like the above examples about permissions based on the following situations. 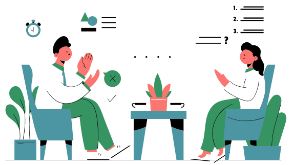 Here are some gambits and expressions that you can use in talking about jobs or professions.

A. Asking about jobs / professions.

B. Telling about jobs / professions.

Read the following conversation and practice it.
E. EXERCISES

I. Guess what profession is being talked about.

II. Answer these questions by referring to the example dialogue between Anne and Jim above.

III. Explain these occupations. Use the Simple Present to tell about the places of work and what he or she usually does.

Example:
A policeman : He usually works in the police station, but sometimes on the street. He controls the traffic and keeps situation in order.
Read about expressing routine activities using the Simple Present tense HERE 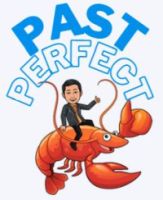 I. Struktur Past Perfect Tense 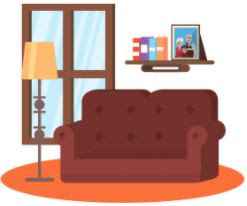 Practice the following dialogue. Pay attention to the italicized words.
In the kitchen
An estate agent is showing Mr. and Mrs. Harris the kitchen.
C. EXERCISE

A. Write sentences with "There is" or "There are" using the provided nouns. Look at the example.

C. Let's play a "Horse Race" game. Answer each question as quickly as possible. You may play it in full-screen mode if necessary.