Narrative Text: Three Brothers, One Wish (Tale from the Philippines) 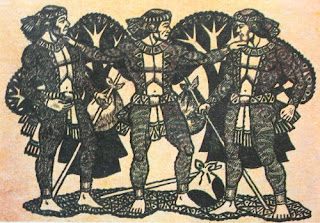 O
nce upon a time, there lived a woman named Ana whose husband was a farmer. They had three sons who, unlike other young men in the village, disliked farming.

After her husband had passed away, Ana had to work alone on the farmland. Her sons were unwilling to help. Tasyo, the oldest son, said, "No one gets rich from farming." Bindoy, the second son, said, "Farming is hard work. The yield is unequal to the amount of time we spend." Castor, the last son, said, "The land is difficult to cultivate. The plants will die if it's dry, and sink if it's wet."

One night, after having dinner, Ana spoke to her sons, "I'm getting older and I feel tired. Since none of you is willing to help me on the farmland, I think you should leave and seek your destiny. After seven years, you may go home and tell me what you have done. Let's see whether you can make your dreams come true without cultivating the land."

On the following day, determining to follow their mother's advice, the three brothers left their home. They were sad to leave their mother, but they had no choice.

After a long hours of walk, they arrived at a junction. Tasyo suggested, "From now on, we should split here and take our own way. At the end of the seventh year, let's meet here on our way home." His brothers agreed, and so, they separated.

The wet and dry season came one after the other. Seven years had passed. The three brothers went home and met at the junction. Tasyo, who had worked in a mirror factory, had mastered the art of making mirrors. Bindoy, having worked at a shipyard, had been an expert in building ships. Castor, having been acquainted with a group of robbers, had become a thief.

Their mother cried in happiness to have them back home. Years of hard work under the sun and rain had made her look older and weaker than before. However, her sons' return had made her very happy.

Several days later, one of the King's messengers arrived in that village with a very important announcement. The beautiful Perlita Princess had been kidnapped by a cruel and wicked wizard. No one knew where she had been kept and what might have happened to her. The announcement said that the King would honor a noble rank to anyone who could locate and bring the princess back safely, and would ask him to marry Perlita Princess.

Hearing the announcement, the three brothers arranged a plan to save the princess. They thought it might be the perfect chance to apply what they had learnt in order to achieve their dream of becoming rich.

Tasyo said, "I have a secret mirror through which we can see anything that bare eyes can't see. With it, we can find where the princess is."

Bindoy said, "I can build a ship to take us wherever the princess is."

Castor added, "I can kidnap the princess wherever she's kept."

The three brothers appeared in front of the King on the following day. the King's grief soon disappeared once he heard that Tasyo knew where the princess was. Through the magic mirror, they could see that the princess was being kept on a tall tower in a faraway island."How can we save her?" said the King.

"Let's see what we can do," said Bindoy and Castor. Then, Bindoy soon built a sailing ship. It was not long before the ship was ready and they sailed to the faraway island.

Arriving there, they found that the tower was guarded by many kinds of giants, including the fierce tikbalang and kapre. They gathered around the tower to prevent anyone from saving the princess.

Shaking their heads in despair, Tasyo and Bindoy said, "It's impossible for us to get past the giants and enter the tower." 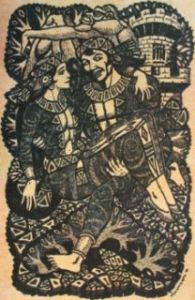 "I'll try," said Castor. As a thief, he had learnt how to break into any kinds of buildings. Therefore, he could enter the tower easily and save the Princess before the giants knew what had happened. He took her aboard the awaiting ship and they managed to escape safely.

When the ship arrived at the port, celebration began to start allover the kingdom. The King was very pleased. He threw big dancing parties at his own expense.

Then, a new problem arose. Which of the three brothers was more eligible to marry the Princess since all of them had played an important part in saving her? Then, he conducted a meeting with his ministers and advisers to discuss the matter. Finally, they came out with a decision.

"Instead of marrying my daughter to her savior," the King announced, "I will give half of my kingdom to the three brothers, to be shared equally among them."

That was exactly what the three brothers had dreamed of. They would soon be rich and able to help their old mother. They returned to their village bringing abundant wealth. Soon, they bought a vast farming land and hired a lot of workers to cultivate it. Their mother now could rest after a long years of hard work. She lived happily with her sons beside her till the day she passed away.

The three brothers had become very rich, but the most valuable thing they learned was that the land will be a very valuable resource only when it is managed with wisdom, consistency, and devotion.