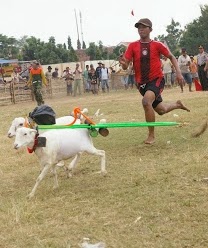 The most important element in this race basically lies ...(4)... the speed of the goats in reaching the finish line. Contestants are ...(5)... to bring additional equipment as well as noise-makers to stimulate the goats’ running speed.

Looking at the enthusiasm of its contestants and the locals from year to year, the goat race is ...(6)... to be held in SEMIPRO festival every year.