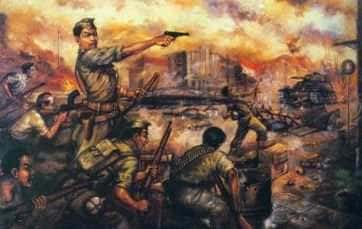 The landing of the Allied forces under the command of Brig-Gen. A.W.S. Mallaby in Surabaya on October 25, 1945 formally was intended to disarm the Japanese military. However, it became a dishonor upon the Indonesian sovereignty since there were the Dutch NICA forces behind the Allied forces. This provoked Surabaya people and led to small revolts which continued until November 3, 1945.

When the commander of the Allied forces, Brig-Gen Mallaby, was killed in an incident near Jembatan Merah (The Red Bridge) on October 30, 1945, the heated atmosphere was swept up. Without prior negotiation with President Soekarno, the Allied command issued an ultimatum forcing Surabaya people to surrender their arms at specific locations before 18:00 on November 9, 1945. If the order was not met with, the Allied forces would bombard Surabaya from the air, sea, and ashore.

After consultations with the central government leaders in Jakarta, the decision was entrusted to the leaders in Surabaya. East Java Governor Suryo then formally announced the refusal to surrender, which was welcomed by all layers of the fighters and people of Surabaya with the independence yell: Merdeka!

At dawn on November 10, the famous Battle of Surabaya broke out. British troops with an additional two brigades (9th and 123rd Indian) of the 5th Indian Division led by Major General Robert Mansergh deployed with Sherman and Stuart tanks began a methodical advance through the city under the cover of naval and air bombardment. They attacked Surabaya from all sides. Two cruisers and three destroyers including HMS Cavalier were in support. From the seaside at Tanjung Perak harbor, their gunfire was directed at the center of the city, while Allied bombers were sweeping from the air.

The allied forces, spearheaded by the British (Gurkha) troops and equipped with modern arms, found themselves up against a force of 20,000 troops of the newly-formed People's Security Army (Tentara Keamanan Rakyat), and more than 100,000 irregular fighters, all dedicated to the cause of Indonesian independence.

The battle was fierce. Ktut Tantri tried to picture the battle poetically in her book "Revolution on Peace Island", but could not avoid the tragic and heroic nuance. "... Surabaya was continuously bombarded by the Allied for three nights. Hundreds of victims fell down. The streets were moisted by blood. Women and children died in the drains. Campongs became seas of fire, and the people ran bewildered to the ricefields to save their lives. But the Indonesian people refused to capitulate ...." 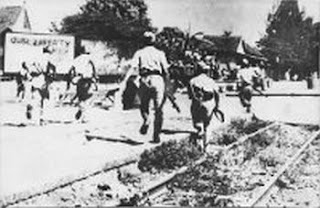 The Republicans fought fearlessly in defending Surabaya, with only two words in their mind, "Independent or Dead". Lieut.-Col. A.J.F Doulton described the bravery in his book "The Fighting Cock": The Indonesian people in Surabaya did not care the victims. If one fell, another one came forward. Bren firing continued. The heaps of dead bodies piled up, but the Indonesian people continued to arrive in greater numbers, pushing on and on ....

The violence of the Indonesian resistance in Surabaya was also indicated by the decision of General Mansergh, requesting for 8 more Thunderbolts and four Mosquitoes as well as 21 Sherman tanks and a great number of carriers.

After three days and nights of the insolent assault, the hospitals and roads were full of victims. More than 6,000 Indonesian troops died and 200,000 civilians fled the devastated city. British and Indian casualties totaled approximately 600. The Allied forces lost another general in this battle when Brig. Gen Robert Guy Loder Symond was WIA on November 10, 1945 and died on the following day.

The battle of Surabaya was the bloodiest single engagement of the war demonstrating the determination of the nationalist forces. Their sacrificial resistance became a symbol and rallying-cry for the revolution. It made the British reluctant to be involved in another war. In fact, Britain openly supported the Republican cause in the United Nations. For the Dutch, it showed that the Republic was not simply a gang of collaborators without popular support, and that they were no longer a colonial power.

The "Heroes of November 10th" monument in Surabaya commemorates this battle. November 10 is now commemorated in Indonesia as "Heroes' Day", in memory of the battle.