O nce upon a time, there was a kingdom in Central Java named Baka. It was named after the king, Prabu Baka, who was a man-eating giant. Desp...

The White Dragon's Egg: The Legend Of Lok Si Naga 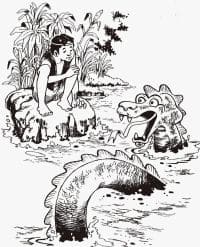 long time ago, there lived a humble fisherman's family near a big river in South Kalimantan. They were very hard-working. Every day, they would go to the river to catch fish using a big rattan scoop called "tangguk" and sold the fish they had caught in a nearby market. Every time they went fishing to the river, they would leave their only son at home as he was still too young to be taken to the big river.

One day, as usual, the fisherman and his wife were fishing in the river. They had been fishing for hours but unfortunately, they were hardly able to catch any fish. Time and time again, they lifted the tangguk only to find to their disappointment that the tangguk was still empty. The fisherman sighed and almost gave up in despair, "What's happening? Where are the fish?" "If we don't catch enough fish, what should we eat?" said his wife. The fisherman didn't say anything but kept on working with the tangguk.

Suddenly, he felt his bucket was much heavier. "Aha!" He shouted with delight, feeling sure that he had caught a very big fish, and quickly lifted the trap out of the water. His heart jumped when he saw what was inside the scoop. It was a huge egg instead of a fish! "What on earth is it? An egg?" Feeling scared, he quickly put the tangguk back into the water to return the egg. However, every time he lifted the tangguk out of the water the egg was still there. It seemed that the egg didn’t want to leave the scoop. This happened several times until the fisherman and his wife decided to take the egg home.

Their boy was asleep when they arrived. "I'm hungry, but we caught nothing except the big egg." said the fisherman softly to his wife, not wanting to disturb the little boy's sleep. Having no fish to eat or sell, they decided to boil the egg they had found in the river. They both ate it and spared some for their son to eat when he woke up.

However, as soon as they had finished eating the egg, they felt something strange. Their skin became scaly and their body grew longer and longer. Now they realized that they had been cursed by the white dragon, an evil dragon living in the big river. But it was too late! They had turned into two big dragons!

When the boy woke up, he was very frightened of what he saw. Much to his horror, two big dragons were lying next to him. He screamed and cried for help, "Daaad ... help!" The two dragons soon tried to soothe him. They convinced him that they were his parents. They hugged their beloved son and told him how they turned into dragons. They reminded him not to eat the egg on the dining table as it was cursed by the white dragon. Whoever ate the white dragon's egg, they would change into a dragon.

They told their son that they had to find the white dragon and kill him to stop the curse. Before disappearing into the river, the two dragons told him that when he saw red blood on the surface of the river, it would mean that they had lost the fight, whereas white blood would be a sign of the white dragon's defeat. The sign would appear on a rainy day with an arch of a rainbow in the sky.

From then on, the boy would go to the riverbank every day, and sat there looking at the surface of the water for hours, worrying about his parents. And so it happened that, one day, after a slight rain on a sunny day and a rainbow appeared in the sky, he saw milky white blood on the surface of the water. It was the sign of the white dragon's defeat! Feeling certain that the two dragons had won the fight, he waited for them to return, but they never did. Nevertheless, he kept waiting patiently his entire life, by the river which the locals call "Lok Si Naga" or "Lok Lua", the River of the Dragons.

Do the reading comprehension exercise for this narrative text HERE
Read "Narrative Text: The Story Of Roro Jonggrang - The Legend Of Prambanan Temples" HERE
Su060610 1236 PM 230