W riting this material reminds me of one of the most amusing experiences that I have had during my long years of being an English teacher. T... 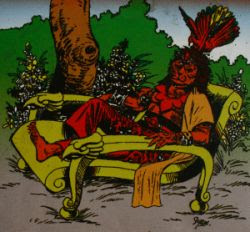 A
long time ago, there was a very beautiful princess named Dewi Sanggalangit. She was a daughter of a famous king of Kediri Kingdom. In spite of her beauty and elegance that had made her win the heart of many princes and kings, Dewi Sanggalangit had no interest in making a family. This worried her parents who had been hoping to have grandchildren.

One day, her father asked, "My Daughter, when will you get married?"

Dewi Sanggalangit replied, "Father, I never think about it. If you really want me to get married, then I will only marry a man who is able to fulfill my wishes."

"Then, what are your wishes?" asked her father.

"I still don't know. Please let me contemplate and seek for revelations from Gods. When I'm done, I will let you know," Dewi Sanggalangit made a request, which was agreed by his father.

On the fourth day of her contemplation, Dewi Sanggalangit, accompanied by Biyung Emban, the chief lady-in-waiting, went to meet the King in the audience hall. After bowing before him, she said, "Father, whoever wishes to be my husband must be able to perform an extraordinary show that has never existed before. It is a dance accompanied by musical hornets and gamelan, with a procession of one hundred forty twin horses. There must be a two-headed animal as well."

The request was announced publicly and soon became a contest for everyone who had been wishing to marry her. All of them failed, except two men, Raja Singabarong, the King of Lodaya kingdom, and Raja Kelanaswandana, the King of Bandarangin.

This worried Dewi Sanggalangit and her father for they knew who the two men were. Raja Singabarong was a cruel and vicious lion-headed man. He was big and tall, with a lion face and neck covered with fur. On the other hand, Raja Kelanaswandana was a handsome man. Yet, he had a strange behavior. He was so fond of boys that he treated them as beautiful girls. Now that the contest had run, there was no way to cancel it.

In spite of his many mistresses, Singabarong had long expected Dewi Sanggalangit to be his queen. In order to fulfill Dewi Sanggalangit's requests, he had ordered his servants to find twin horses. He had also had the best artists create an attractive show and find a two-headed animal. However, the last two requests proved to be difficult to meet.

One day, he told Iderkala, his vice regent, to go to Bandarangin and find out about Kelanaswandana's preparation. Five days later, Iderkala returned, reporting that Kelanaswandana was ahead in the contest. More than one hundred twin horses had been prepared. An attractive show had also been created. Kelanaswandana didn't have much difficulty due to the help and support of his loyal vice regent, Patih Pujanggeleng, and his people who loved him and wanted him to get married and stop his bad habit. The only thing they couldn't find was a two-headed animal.

Raja Singabarong got very upset and told Iderkala to prepare a well-armed troop and attack Bandarangin at any time. He sent spies to locate Kelanaswandana's route from Wengker to Kediri, where he would ambush Kelanaswandana and seize the procession. 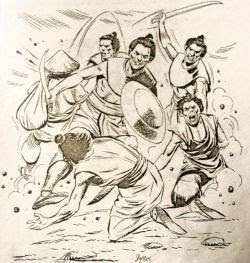 Filled with anxiety as his spies had not returned, Singabarong sent Iderkala to find out what had happened. His furry head was itching from fleas, so he went back to his castle where his peacock would peck at the annoying insects. As the bird was perching on his shoulder eating the fleas on his head, he fell asleep. He was unaware of what was going on, but as usual no one was dare to disturb and wake him up.

Meanwhile, Kelanaswandana's troop had advanced far into Lodaya. They didn't meet heavy resistance as the enemy was totally unprepared. Iderkala and his troop had also been defeated near the border. Now, they were nearing Singabarong's castle.

The noise of the troop woke Singabarong up. He rushed furiously outside his castle to see what was going on. He saw most of his soldiers had been defeated by Bandarangin troop, but what surprised him most was the sight of Raja Kelanaswandana among his troop. He shouted in anger, "Hey, Kelanaswandana. What in the world are you doing here?"

Raja Kelanaswandana replied, "Stop acting like a fool! I know you've been planning to seize what I've prepared for Dewi Sanggalangit. You must be punished!" As he said that, he directed his magical power towards Singabarong, whose head suddenly changed. The lion head had merged with the peacock perching on his shoulder. It made Singabarong look like a two-headed animal.

Blazing in anger, Singabarong drew his keris and charged at Kelanaswandana. He moved so fast that Kelanaswandana could not evade the attack. His left shoulder was scratched. The scar soon blistered, blackened, and fumed.

Kelanaswandana barely had time to make a stance when Singabarong charged at him with another attack. This time, he managed to block it with his hand, making Singabarong stagger a few steps back. Kelanaswandana didn't waste the chance. He launched a powerful kick which dropped the keris in Singabarong's hand. 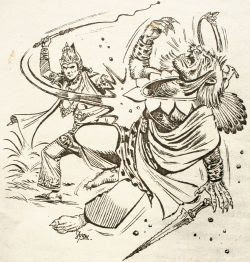 On the verge of his defeat, Kelanaswandana got up and removed a rope-like belt from his waist. It was his secret weapon, the magical whip of Kyai Pecut Samandiman. He slashed it at Singabarong. The whiplash sounded like an explosion, leaving a trail of fume in the air, and tossed Singabarong's body as if it had been a coin. Singabarong fell to the ground. As he tried to get up, he felt so weak that he tottered.

Raja Kelanaswandana approached Singabarong, who was now unable to move. "Be a two-headed animal!" he said. Suddenly, Singabarong turned into a strange animal. It had two heads, one was that of a lion, the other was a peacock's right above the lion's head. Kelanaswandana immediately asked his men to capture the animal and bring it home to Bandarangin.

Several days later, Raja Kelanaswandana came to Kediri to propose a marriage to Dewi Sanggalangit. One hundred forty twin horses were tailing behind him, accompanied by a strange two-headed animal which was dancing in excitement to the music of gamelan and hornet. Everyone was happy to see the show.

Dewi Sanggalangit accepted his proposal and became the Queen of Bandarangin in Wengker. Raja Kelanaswandana had managed to stop his bad habit and ruled Bandarangin in peace and harmony.

The show itself is still very popular today, known as Reog Ponorogo. It takes the name of its origin, Ponorogo, which is another name of Wengker, in East Java, Indonesia. 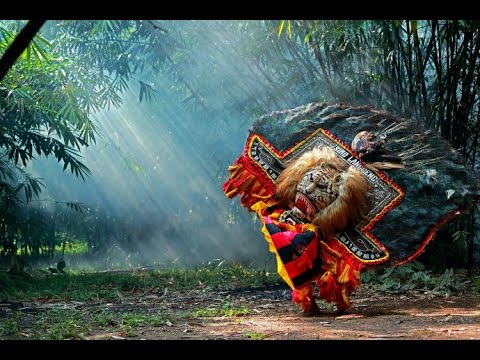 Retold in English by Mister Guru