B efore doing the exercises below, you may want to review what we have learned about comparisons in " Degrees of Comparison: Posi... 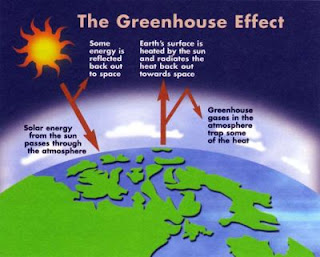 Instructions :
Fill in all the gaps with the correct word provided below to complete the following passage. When you click the blank space, a drop-down menu containing answer choices will appear and you can choose the word that you think is correct.
acting      affect      allow      alter      begin      consider      decrease      depend      keep      needs      produce      produced      risen      states      understand    Did you ever wonder why the weather has been strangely in the past few years? One of the causes you may is global warming. Global warming is the increase in the temperature of the Earth's surface. It is by the emission of greenhouse gases. Greenhouse gases such as carbon dioxide, methane, nitrous oxide, halogenated fluorocarbons, ozone, and hydrocarbons incoming solar radiation to pass through the Earth's atmosphere but infrared radiation from leaving the atmosphere, thus causing the atmosphere to warm. Life on Earth the natural greenhouse effect, but excess greenhouse gases will retain excess heat and the normal atmospheric temperature of the Earth, causing global warming.

According to "Scientific Sleuths Track Climate Trends: Unraveling the mystery of global warming's cause and effect," by Alan Boyle, mean global temperatures have 1 degree Fahrenheit in the past century. Boyle also that last year was declared to be one of the warmest in 120 years.

In order to what global warming really is one must look at the effects it will have in the future. Effects in the weather and climate would be one. Global warming could warmer and wetter climates for the North America, Europe and Asia. This may not be such a bad thing for these areas as it could the amount of frost that affects crops. Water problems, on the other hand, could be detrimental to life on earth. The melting of glaciers, ocean ice and ice shelves in the Arctic and Antarctic could be one of the clearest indicators of global warming. According to Janine Bloomfield, a staff scientist at the Environmental Defense Fund, there are urban areas that on snow packs for their water supply. The increased melting of these packs along with summer droughts could cause water shortages for these areas. Another problem is rising sea levels due to melting glaciers and ice. This could cause shoreline erosion, and the oceans will slowly to consume coasts all over the world.
These may not be issues that will us tomorrow, but as humans we need to take the initiative to take care of the Earth. We need to take measures to prevent these problems from affecting generations to come, so they to can have bright and promising futures.
To do the computer-based version of this cloze text and find out your score, click the link below.